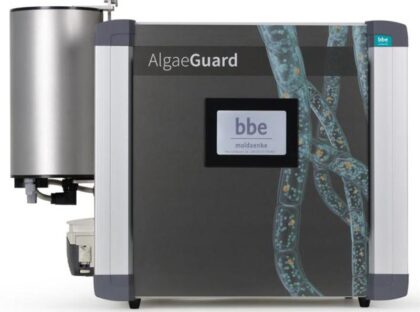 The special patterns of this algal fluorescence – so-called fingerprints – are used in bbe fluorometers for the qualification of different algae classes. The light sources for the excitation are LEDs with selected wavelengths. The fingerprints of four algae classes and for yellow substances are pre-defined in the instrument. However, user-specific fingerprints can also be defined.

The physiological performance of the algae (algae activity) on photosynthesis is determined by excitation using additional background light. The resulting variable fluorescence allows the calculation of algae activity given as the Genty parameter. This Genty parameter represents the quantum yield and is also an expression of the vitality of the algae.

A regulated inflow of sample water enhances the versatility of the AlgaeOnlineAnalyzer
A valve switches alternatively between two tubes of the AlgaeOnlineAnalyser. The cycle time is controlled by the AOA software. This new feature enables the user to take water samples from different depths or locations, and measures algae chlorophyll online at high frequency. The records allow the user to draw conclusions about the success of the measurements in order to reduce or enhance microalgae in process water, cooling water or a culture.

The AlgaeGuard is designed as a “plug and play” instrument, i.e. measurements are carried out automatically using pre-defined parameter settings immediately after boot-up or by pressing the start button on the touchscreen panel.  Continuous configuration by the operator is not necessary. Maintenance is as low as 1 hour per month.  Parameters can be changed using the external bbe PC software if necessary.

The bbe PhycoSens* is deployed in measuring stations and laboratories in which online measurement of water quality is required for rivers, reservoirs, dams, and lakes as well as in drinking water production.

The instrument impresses due to its rapid analysis of chlorophyll and unbound phycocyanin (free PC) concentrations. The free color pigments of cyanobacteria are an important indicator for cyanotoxins as well as flavors and odorous substances in raw water. The online device can also measure the photosynthetic activity of microalgae and the transmission. The detection of different algal classes by excitation with colored LEDs distinguishes this measuring instrument from its competitors. Part of the analysis is a yellow substances (CDOM) measurement to adjust the calculation of the total chlorophyll and phycocyanin contents. The integrated cleaning unit protects against growth problems during long-term measurement.

The bbe software supplied with the instrument facilitates detailed data analysis. All measurement data can be displayed numerically or graphically. Sections of data measurements can be recorded and printed using the zoom function. Data can also be exported to a spreadsheet program (e.g Excel). All settings and calibrations are performed by the software.